skip to main | skip to sidebar

Time for the Classics 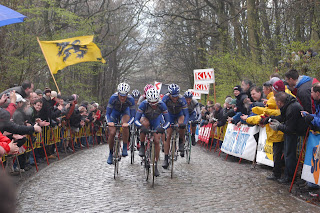 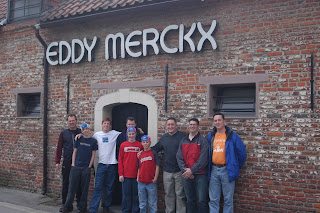 It has been 7 years since my visit to the cobbles and it still seems like it was only yesterday. We rode Flanders, and Paris Roubaix the day before each event. The Belgian cobbles were short sections of very steep and slippery stones, that if you did not stay seated, your tires lost traction and you ended up with the embarrassing hike a bike to the top. The French cobbles were punishing in a different way, long straight stretches that you had to turn you big ring and hold on for the ride. I was not much into road racing when I made the trip, I bought my first road bike only three months prior to the trip, and then punished it for 7 days all over Belgium. Hopefully we will go back in the next few years. Need to go to L-B-L and Amstel next time.
Posted by Meat at 1:25 PM No comments:

Made it out to Ray's Indoor Mountain Bike Park this weekend and had a blast. Spence, Cheston, and Steve were already on site for three hours when Chasity, Bryan and I rolled in. After registering and renting our Trek Mullets we strapped on the safety gear and rolled out. Bryan immediately hit the hard wood with his shin and got the first blood drawn of the day. After that it was 3 hours of pump track, big jumps and XC fun. Chasity conquered the whole loop and made some laps without dismounting and we had a great time. Definitely will be going back for round two. I will go bigger over the tabletops next time and hopefully get in rhythm to clear all the jumps of the Expert loop.
Posted by Meat at 7:31 PM No comments:

Back in the saddle again

Okay it has been a long time, since then I have shattered my collarbone, had surgery, recovered, gained 12 pounds, started riding and running again, hired a new coach, and lost 5 pounds. Training for 2011 is three weeks in and I am ready to get outside and ride.
Posted by Meat at 3:11 PM No comments: 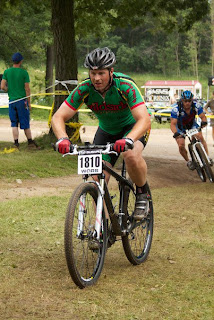 I can't believe it has been over a month since my last post, since then I have switched back to Comp Clyde and competed in the Subaru Cup in that category. I was leading the XC race when my master link came apart on a rock strewn downhill. I dug around in my camel back looking for that master link that is supposed to be in there and it was nowhere to be found. So I pulled the chain out after Bob Phelps passed me and started to run it in. luckily it was my last lap and I only had 2.5 miles to go. I kept looking over my shoulder for any of the other clydes but I did not see any. After coasting down the last section of single track I ran through the finish for second place. Third was still another 3 minutes behind me. On Sunday was the short track and Super D. I was in the last wave of the Cat 2 races and lined up in the front row for the start of the hurricane of pain. When Don said goooooooooo I new I had to drill it for the first 4-5 laps and stay at the front. I managed to stay in third then fourth spot for the first 4 laps and started to fade a bit. When my teammate Bryan caught and passed me I dug in a little deeper and closed the gap. By this time half of our wave had been pulled form the course because they were about to get lapped and I was fading fast, but managed to finish the entire race and took 1st in my group and 8th overall for my wave. Finally it was time for the Super D. The organizers did away with the Lemans start and were lining us up in waves of 10-12 racers. I got on the bottom of the list and had to line up in row two, not a good place to start when you have a 75 yard sprint to the trail. I lined up behind a fast sprinter and elbowed my way to third just before the woods. The first guy bit it in turn one and was on his back headed for the trees. I kept half wheeling the guy who was now in first but could not get around him in the downhill single track. When I broke out in to double track at the bottom he put in a little attack and had about a 30ft lead. Then as I was making my last ditch effort he looked back and attacked again. We crossed the line with him beating me by .2 seconds. Not a bad weekend of racing
Posted by Meat at 5:15 PM No comments: 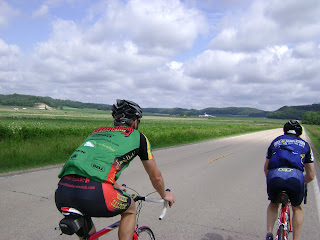 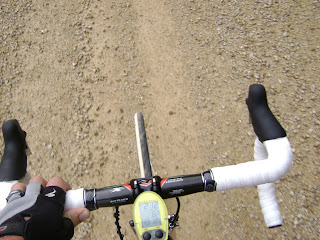 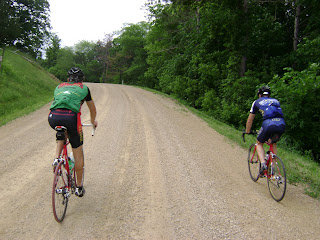 Another Sunday, another long ride. Met up with Ryan and Bryan in Denzer and headed out for a three hour ride in southwest Sauk County. We were being circled by ominous clouds all morning but managed to stay dry. Made a pit stop in Plain to check out a possible Brefixt Ride spot but they are not open on Sunday, oh well I guess it is back to Marthas in Lyndon Station. We finished up the ride with a great chicken dinner at the Denzer town Hall.
Posted by Meat at 2:56 PM No comments:

Wausau, race number three on the WORS schedule. After a ten day rest week I was finally feeling good about riding my bike again and was going to try a new approach to the race. the day started as usual with Monica heading out for the Citizen Youth race. after not seeing her come through the finish and waiting forever I finally saw her in the woods heading our direction. There were three possibilities as to why she was so far back, one-she had a mechanical, two she got off course, or three-she crashed. When she came by I shouted my usual words of encouragement and then I saw the muddy tears and the blood running from her knee to her ankle. Usually the dust and dirt crusts over the wound fast in a mountain bike race, but she was still bleeding. I would like to thank Rick Walls and John Holcomb for getting her to the finish line, after discussing how to get back to the chalet they told her the fastest way was to finish the race, and that she did. When I got her to the first aid we found that her shorts were full of sand and gravel, she had gravel rash from her shin to her hip and a puncture wound to her knee and palm of her hand. She said she cried for about 5 seconds and stopped because someone might see her. She is one tough cookie.
Then Chasity went out and cut 21 minutes off of her time from last year and finished ninth, by this time it was about 90 F out and getting hotter. I decided to take a measured effort to the race this time and not go out so hard at the start. Everything was working as planned as I made my way through the field. I was taking turns working with Russel Jobs and was feeling good, on the tail end of the second of three laps I got slightly off line in the rocky single track and hit a razor sharp rock that was pointed at me. Psssh there goes the front tire, psssh there goes the back tire. The double flat, as far into the 8 mile lap as I could get. It took me 35 minutes to get back to the finish and register my first and hopefully last DNF for the year.
Posted by Meat at 4:50 PM No comments:

Well the first WORS race of the year was fast and fun as always, I do not think I was mentally or physically ready for it though. After doing the Circut of Sauk road race the day before I did not have enough left in the tank. I should have just did one race instead of two if I wanted a good result at either, but it is hard to turn down a race that is only 15 minutes away. I think I will try the double again next weekend with LDL Saturday and Rhinelander Sunday, just won't expect great results at either of them. The Wildside Velo team had a great turnout for Iola with 14 racers competing and it was good to reconnect with all the other racers after the winter lay off.

Meat
Baraboo, WI
Born in Muskegon MI, Schooled in Houghton MI, and living in the land of beer and cheese since 1996